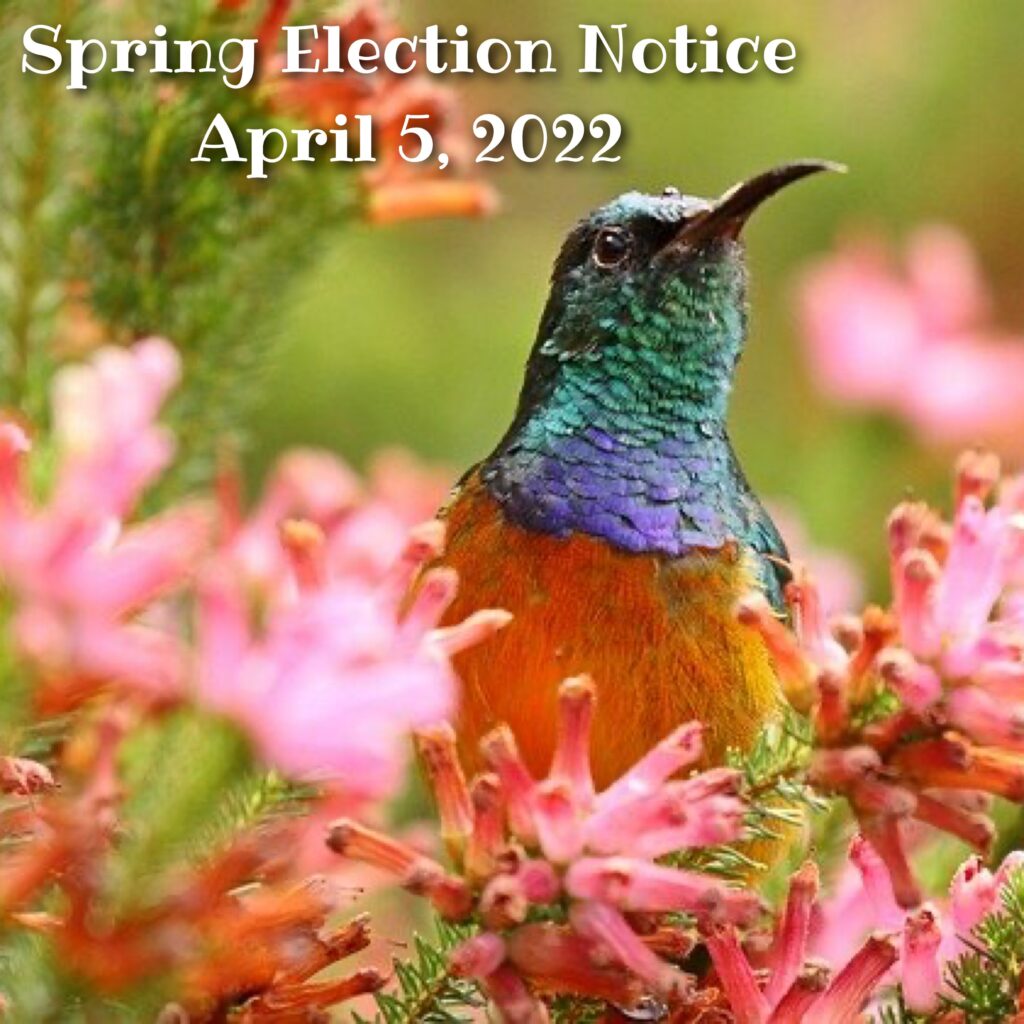 Office of the Town of Delavan Clerk

To the voters of the Town of Delavan:

Notice is hereby given of a spring election to be held in the Town of Delavan on Tuesday, April 5, 2022, at the Waters Edge/Delavan Community Park Building, located at 1220 South Shore Drive, Delavan, at which the officers named below shall be nominated.  The names of the candidates for each office, whose nominations have been certified to or filed in this office, are given under the title of the office, each in its proper column, together with the questions submitted to a vote, for a referendum, if any, in the sample ballot below.

Upon entering the polling place and before being permitted to vote, a voter shall:

*If a voter does not have acceptable photo identification, the voter may obtain a free photo ID for voting from the Division of Motor Vehicles.

**If the voter is unable to sign the poll book due to disability, a poll worker may write the word “exempt.”

If a voter is not registered to vote, and if the voter provides proof of residence, they may register to vote at the polling place on Election Day: 1220 South Shore Drive, Delavan. Paper ballots distributed to voters must include the initials of two inspectors.  Upon being permitted to vote, the voter shall enter a private voting booth and cast their ballot. The vote should not be cast in any manner other than specified here. Sample ballots or other materials to assist the voter in marking their ballot may be taken into the booth and copied. The sample ballot shall not be shown to anyone to reveal how the ballot is marked. A voter who is a parent or guardian may be accompanied by the voter’s minor child or minor ward.  An election official may inform the voter of the proper manner for casting a vote, but the official may not advise or indicate a particular voting choice.

A voter may select an individual to assist in casting their vote if the voter declares to the presiding official that they are unable to read, have difficulty reading, writing, or understanding English, or that due to disability are unable to cast their ballot.  The selected individual rendering assistance may not be the voter’s employer or an agent of that employer or an officer or agent of a labor organization which represents the voter.

Where Optical Scan Voting is Used

When using an electronic ballot marking device (“ImageCast Evolution-ICE”) to mark an optical scan ballot, the voter shall touch the screen or use the tactile pad to select the name of the candidate of his or her choice for each office for which he or she intends to vote.  To vote for a person whose name does not appear on the ballot, the voter shall type in the name of the person of his or her choice in the space provided for a write-in vote.

After Voting the Ballot

After an official ballot or optical scan ballot is marked, the voter shall shield the ballot, so the marks do not show (ie: flip upside down), walk to the ballot box and deposit the voted ballot into the voting devise or deliver the ballot to an inspector for deposit. The voter shall leave the polling place promptly.

If a voter spoils a ballot, they shall return it to an election official who shall issue another ballot in its place, but not more than three ballots shall be issued to any one voter.  If the ballot has not been initialed by two inspectors or is defective in any other way, the voter shall return it to the election official who shall issue a proper ballot in its place.

The following is a sample of an official ballot for the Town of Delavan. Samples of each of the seven unique ballots for this election can be found at: myvote.wi.gov/en-us/Whats-On-My-Ballot by entering your address.

Question: Shall the Joint School District Number 8, Village of Fontana, Towns of Delavan and Walworth, Walworth County, Wisconsin be authorized to exceed the revenue limit specified in Section 121.91, Wisconsin Statutes, by $1,200,000 per year for the 2022-2023 school year and the 2023-2024 school year, by $1,400,000 for the 2024-2025 school year and by $1,600,000 for the 2025-2026 school year, for non-recurring purposes to maintain the District’s educational programs, small class sizes, individualized instruction and staff and to complete building maintenance