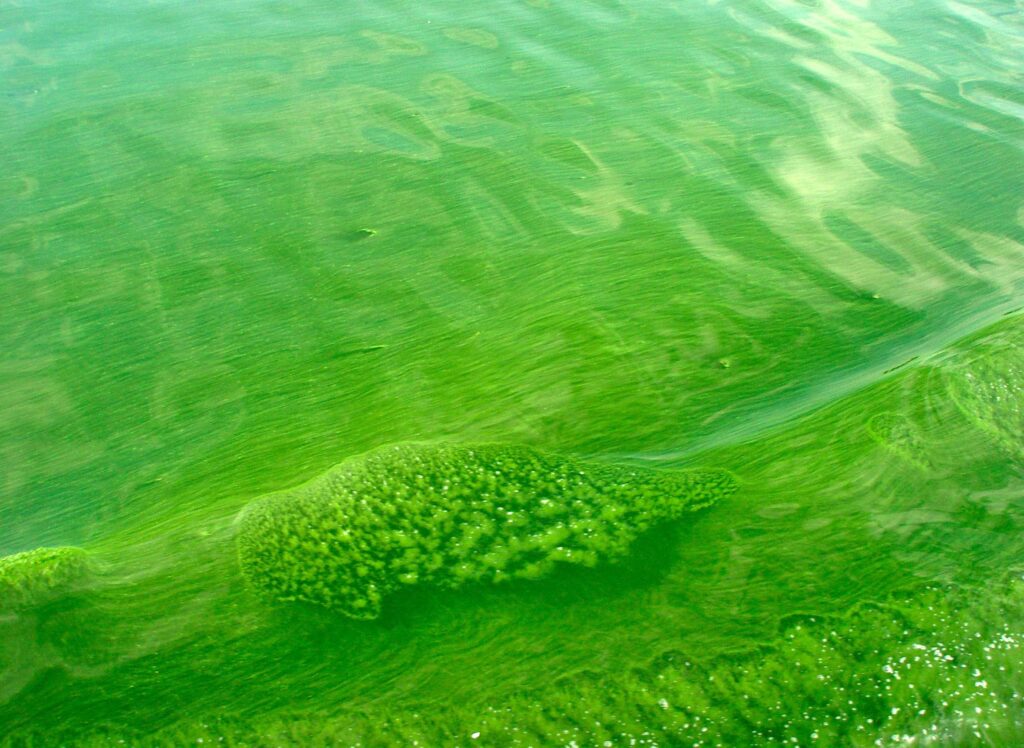 Algae are primitive, primarily aquatic, one-celled or multicellular plant-like organisms that lack true stems, roots, and leaves but usually contain chlorophyll. They grow in all lakes, not just Delavan Lake, when they have the right conditions such as adequate nutrients (mostly phosphorus but nitrogen is important too), light levels, pH, temperature, etc. Generally, the amount of phosphorus controls the amount of algae found in a freshwater lake or water body. The more nutrient-enriched a lake, typically the more algae in the lake.

Healthy lakes need algae. Algae are important to the productivity of a lake or water body. Algae are primary producers. They use sunlight (through photosynthesis) to produce carbohydrates and are eaten by grazers such as protozoa and zooplankton (little animals like water fleas and rotifers). The zooplankton are, in turn, grazed upon by fish, which are eaten by bigger fish, and on up the food chain. A productive lake produces large fish and good fishing for humans as well as supporting food and habitat for wildlife and waterfowl. In this context, most algae are desirable for lakes.

Blue-green algae is present in all lakes and will bloom from time to time. Blue-green algae are actually bacteria. They are called cyanobacteria after the blue-green pigments that they produce. Cyanobacteria are of greater concern than true algae because some species can produce potent toxins. However, even known toxin-producing species may not produce toxins all the time. Even if blue-green blooms are not toxic or are composed of a species that does not produce toxins, they are unsightly and when they decompose often produce bad odors.

To get rid of the stuff, there are no simple answers. Algae may grow for a variety of reasons, but nutrients generally limit algae growth. Any long-term solution to algae management involves nutrient reduction. Nutrients throughout the watershed may be contributing to the algae problem: Phosphorus is Delavan Lake’s biggest culprit. See related story.

A simple Google search pops up a few home remedies for blooms when, and if, they happen, but these are NOT recommended tactics.

Raking the algae to shore is partially effective with some types of algae (filamentous) but are fruitless with blue-green algae, since it isn’t technically an algae. Using barley straw or any other straw for algae control is an idea that caught on because of web reports on its success in ponds. The Environmental Protection Agency (EPA) has not registered barley straw as an algaecide or algaestat, and we don’t recommend taking matters into your own hands with this tactic. Results with barley, according to the English researchers, can take several months… Results from American research have not been consistent or very positive either. The straw is unattractive lake clutter because it doesn’t decompose quickly, so it would just trade one eyesore for another.